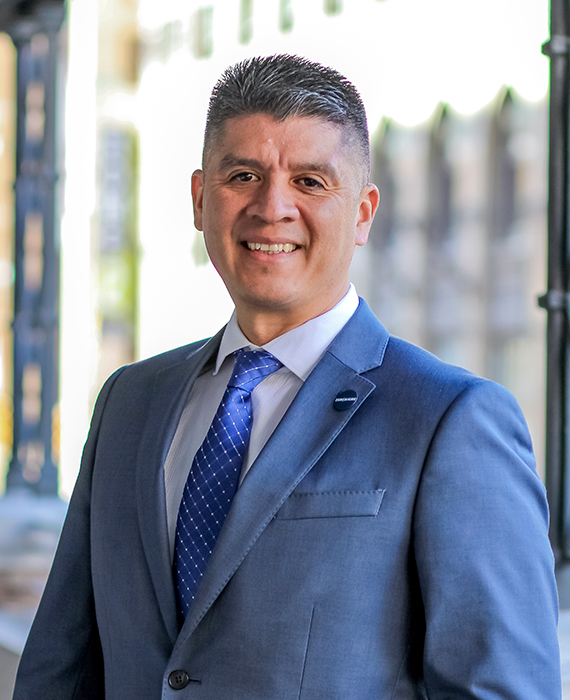 Serving as the Deputy Senior Director of Operational Business Development, Benjamin Miranda, Jr. is responsible for ensuring the success of the development, implementation, operation, and expansion of Endeavors’ many lines of service.

Ben’s holds an exceptional record of success collaborating with state, local, and national partners, and this role allows him to utilize his strengths in relationship-building as he creates and maintains strategic partnerships with local, state, and federal government and stakeholders to promote Endeavors and seek support for the expansion of programs.

Prior to his current role as Director of Business Operations, Ben served as the Director of Operational Impact for Endeavors. In this position, he led outreach efforts to support the Steven A. Cohen Military Family Clinic at Endeavors El Paso’s mission to provide high-quality, accessible, and integrated mental health care to Veterans, Service Members, and their families.

A 24-year Veteran of the United States Air Force, Ben rose to the Air Force’s highest rank of Chief Master Sergeant. He deployed in support of Operations ENDURING FREEDOM, IRAQI FREEDOM, NEW DAWN, and UNIFIED RESPONSE, as well as to multiple counter-drug operations in Latin America.

Ben serves as a Commissioner for the Texas Military Preparedness Commission (appointed by the Texas Governor) and sits on the Board of Directors for the Chamber of El Paso and the El Paso Homeless Coalition-Continuum of Care. He is the Board Chair for the Chamber’s Military and Veteran Affairs Committee and is a lifetime member of the Disabled American Veterans and the Air Force Sergeants Associations. He holds a Master’s Degree in Educational Leadership from Walden University.

Why I Fight For Homeless Veterans In Puerto Rico: Peter’s Story

It’s More Complicated Than, “Just Get a Job.” Why Housing Has to Come First.

Andre’s Story: “From the Sidewalk to My Own Apartment”

How a Job at Endeavors Unlimited Revealed Terrance's Contagious Smile

Mark’s Story: I Fight for Unhoused People Because I Know What It’s Like

Volunteering In Puerto Rico Is “A Work Of Love”